You can contact Hampshire
& Wight Trust for Maritime
Archaeology in the
following ways :

Or use the address at the
bottom of the page

The project will use a selection of historic maps which are held at Hampshire Record Office in Winchester. The maps themselves were produced for a number of reasons over the course of the last 200 years and reflect the changing nature of Britain’s countryside.

We have King Ethelwulf of Wessex to thank for introducing tithes to the country. A tithe was an ‘in kind’ payment made to the local church, typically 10% of an individual's produce. As this was typically stock or crop, great tithe barns were built by local monastery’s or churches in which to collect tithes within the parish; many of these barns still survive around the county today.

In 1836 the Tithe Commutation Act made it possible to pay tithes in cash equivalent to 10% of produce. This legislation required that detailed maps be drawn up on order to identify land ownership and use within the parish. Each map was supported by a document called the tithe apportionment, which detailed the owners, the nature of the land they possessed and the rent charges they were liable to pay.

Three copies of each map were made. The first was held by the tithe commissioners and later passed to the Inland Revenue. These copies are now in the care of the National Archives. The second would be kept in the diocesan registry and the third in the local parish church. More often than not it is this copy that passed to Hampshire Record Office.

Tithe maps are an important tool for research as they are amongst the first truly large scale maps that show the countryside prior to the Industrial Revolution. When researching historic rights of way they can often be used to identify whether a road or track was considered private land (for which a tithe was payable) or a public highway. 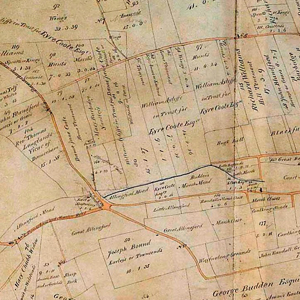 The process of enclosing England’s field systems was not an overnight one; many parts of the countryside were enclosed hundreds of years before others. This was often done by private arrangement and it wasn’t until the 1801 Inclosure Act and the 1845 General Act that the process became formalised. Under these acts, commissioners allotted land to principal landowners (a process that sometimes robbed other people of their property). The acts required that maps and award documents be created to detail the changes.

Unfortunately, many parishes in Hampshire had already been enclosed before these acts and no maps were produced to document them. Less than a third of Hampshire is detailed in enclosure maps, but where they exist they provide an important record. The mpas were drawn up as legal documents which establish public highways quite clearly. 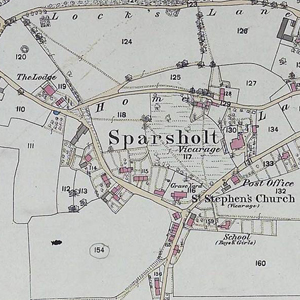 It is often forgotten that the first OS maps were drawn up for military purposes and that the 'ordnance' in Ordnance Survey was literally armaments and ammunition. After successfully mapping the Scottish Highlands in order to organise the subjugation of the clans there, the Board of Ordnance (now the MoD) began a full survey of the country. The very first OS map, covering Kent at a scale of 1 inch to 1 mile, was produced in 1801. However it would be more than half a century before mapping of the rest of the British Isles was complete.

The new Ordnance Survey was based in the Tower of London until a fire forced them to relocate. In the mid 19thcentury they moved into the old cavalry barracks on London Road in Southampton where they remained until German bombing in WWII forced the offices to disperse. In 1969 they returned to Southampton in the purpose built headquarters in Shirley and relocated to new offices on the city outskirts in 2011.

Towards the end of the 19th century Ordnance Survey produced their County Series maps in two scales; 6 inches to the mile and 25 inches to the mile. With the first edition, published between 1865 and 1872, Hampshire was covered in the 6 inch scale. The second (1894 – 1987) and third (1906 – 19190) editions saw the almost the entire county mapped at the 25 inch scale with an unprecedented level of detail. 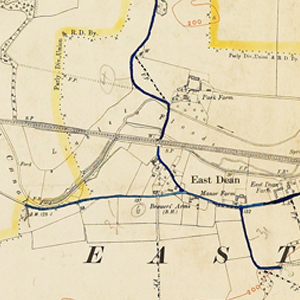 In the 1920’s the responsibility for county highways was passed from district and borough councils to the county council. For the purposes of the transfer, public highway ‘handover’ maps were drawn up to identify known public highways within the county. More often than not these were based on existing OS maps and edited to mark all public highways – from A-roads to footpaths. However, these maps suffer from several flaws – most particularly that if a right of way was not well known, it was not recorded. Even so, a right of way marked on these maps is invaluable evidence.